As posted on Benzinga on 18th September 2016. Find the original article here.

Wendy’s Co has spent nearly all of the past year trading between $8.50 and $11. In that time the company has appointed a new CEO, weathered a credit card security breach, and launched the successful “4 for $4” promotion.

The following chart, courtesy of Stockal, shows how sell-side analyst sentiment on the company compares with the stock’s price. The price is shown in orange with the scale on the left side, while the analyst sentiment is measured via Stockal’s Confidence Meter on the right, a gauge of sentiment from over 200 Wall Street analysts.

Notable ratings changes include RBC, who upgraded the fast food chain to Outperform in November only to downgrade it to Sector Perform in August, and Goldman Sachs, who added the company to its Conviction Buy list in April before removing it in August. Currently, Goldman, Suntrust Robinson, Longbow Research and Barclays have Buy ratings on the company, while UBS holds a Sell rating.

Increases in the Confidence Meter are indicated by the blue arrows. 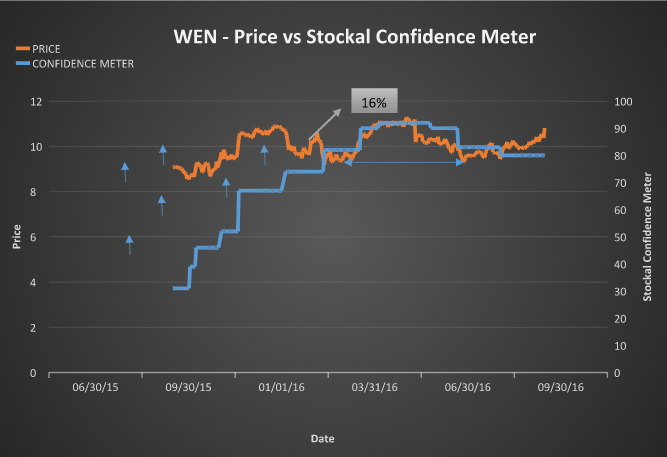 Harley and Boeing may have bullish market sentiments

September 8, 2016September 10, 2016 Keerthi Rao
As appeared on Benzinga on September 6th, 2016. The original article may be found here. Stockal, a firm that analyzes social