Off-late the stock has swung between $102 and $96 or thereabouts. Interestingly analyst opinion for the stock has also been up-and-down in the same time period.  As you would see, the below chart shows how the Confidence Meter went up from 60% to 64% and fell again to 59%. Confidence Meter is a weighted consensus of the opinion of multiple analysts for NVDA – based on reputation of each analyst involved. 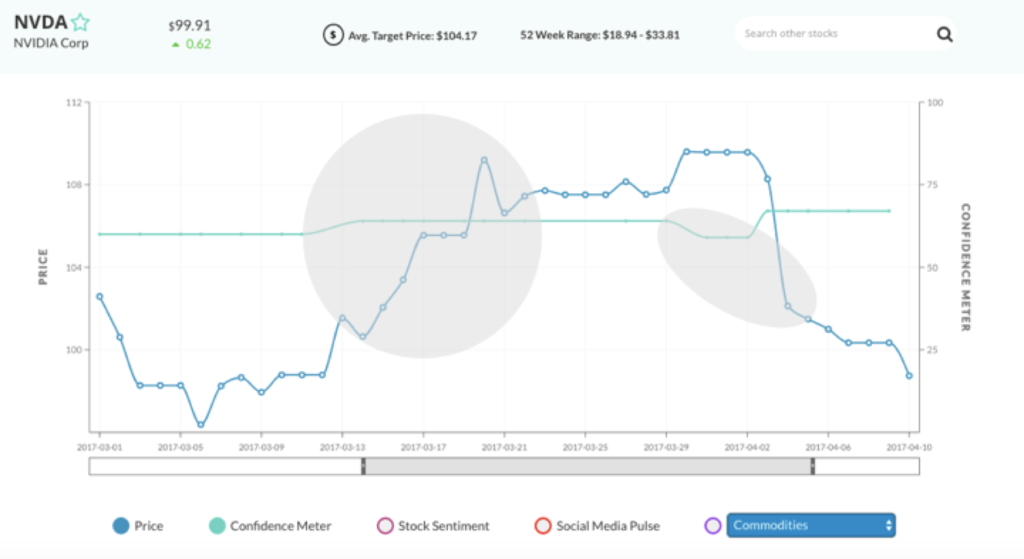 The other supporting signal that NVDA gets is from Social Sentiment. This is sentiment derived from News and Social Conversations (Twitter, StockTwits etc) about the stock. NVDA has enjoyed, by and large, positive sentiment over the last couple of months. Fewer troughs than crests. And a couple of significant positive spikes – as seen in the chart below.

The one negative signal though is the Revenue Prediction as it currently stands. With an earnings announcement scheduled for May 9, it will be interesting to see if the predicted revenue changes at all. As you can see, the actual revenue has beaten the predicted revenue more often than not (while closely following the trend) – one would do well to wait and watch!

Gordon T
Gordon writes about tech stocks, startups and trends. Also loves to dabble in finance with a focus on fintech.

Stocks of Carter’s Inc. take a plunge by 12%

February 17, 2021February 23, 2021 Team Stockal
U.S. stock markets have been major wealth creators among other global equities, having withstood turbulent economic times,  one of them